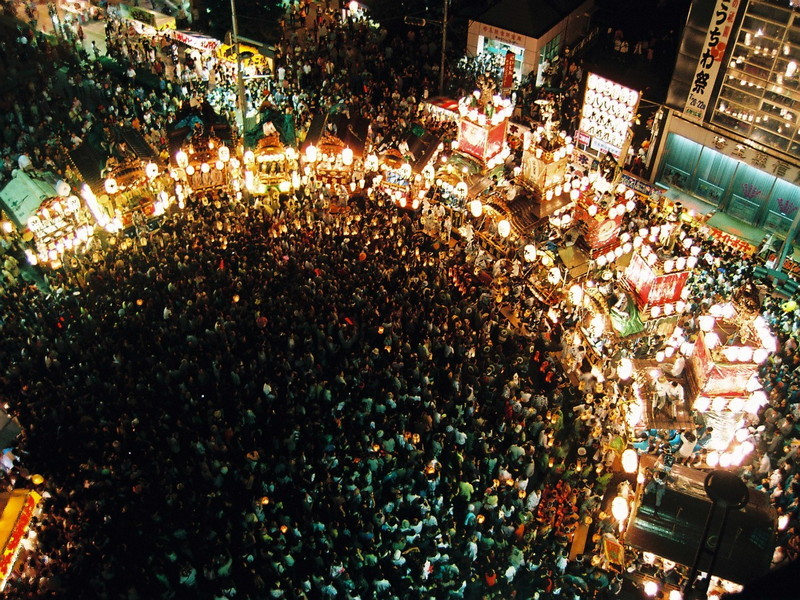 Kanto’s best Gion Festival, performed every year for three days between July 20th and the 22nd. Furthermore, it is one of the most prominent festivals in Saitama prefecture, bustling with life, and attracting many visitors. There used to be a custom on the day of the festival to cook Sekihan, red bean rice, to eliminate plagues. Based on this custom, Sekihan was offered at shops and known as Kumagaya’s Sekihan Treat. Later, fans were given as gifts instead of Sekihan, and the festival was called Kumagaya Uchiwa (fan) Festival instead.
The festival starts with the Togyo Festival (transferral of a sacred object from its place of enshrinement), by the second day, the Jyunkō Festival takes place in which stalls line up and parade floats are pulled through town, adding up to a total distance of around 10.5 km. On the last day, 12 floats and stalls gather, with the “Hikkawase Tatakiai (in which floats are faced to one another and festival music play), marking the climax of the festival. After, in solemn air, the portable shrine returns to the main shrine, and “Kangyo (Return) Festival” is held, quietly ending the festival.