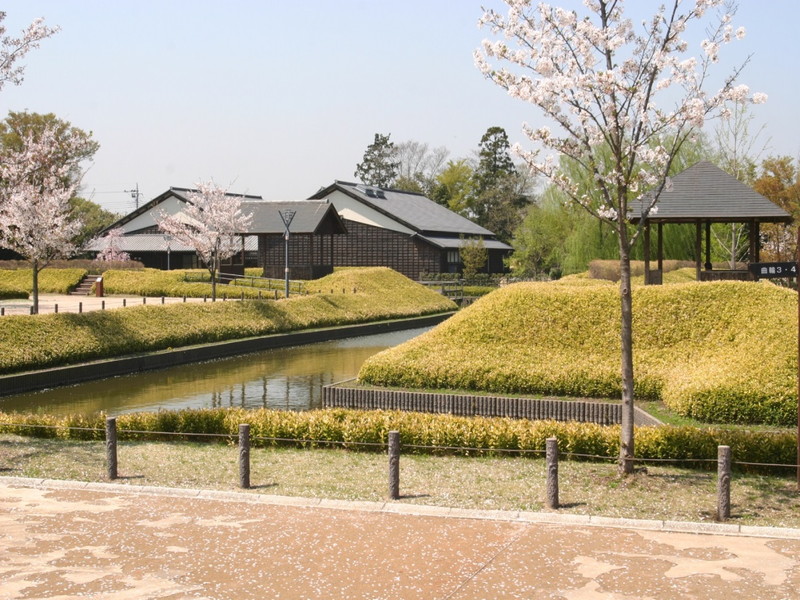 The inside of the park adjoins the Nanbata Castle Park Museum, located in the center of the premise, and is divided into the east and west sections. On the east side, is the “Shiroato Zone” in which the figure of the Nanbata Castle Park is restored, and on the west side is the “Kominka Zone” in which the relocated Kominka built in the city is restored.

The enclosure, water moat, earthwork of the Sengoku Period of the Nanbata Castle have been restored in “Shiroato Zone”. There are hygrophytes such as the water lily planted at the water moat and scenes of each of the four seasons can be enjoyed.

In the “Kominka Zone”, there are relocated buildings of two old houses and a gate of a townhouse designated as the city’s cultural property which was built at the beginning of the Meiji period.

Annexes such as the granaries, libraries, barns are newly built and Fujimi’s nostalgic scenery of a farm is reproduced.

At the granary, one can watch performing arts peculiar to the local area along with a video of restored old houses. Further, “Chokkura” is attached to the regional exchange facility, and local produce and souvenirs can also be purchased.

Facilities
Nanbata Castle is a castle ruin of Nanba Tashi, who was mainly active in Fujimi City during the middle ages, with the castle designated as a historical site in Shōwa 36 (1961). The castle on the plains is built on the corner of the lowlands of Arakawa, with the size of the castle estimated to be more than 5 hectares. The Nanbata Castle Park is a historical park with an area of about 17,000 square meters. With the purpose of preserving and using this precious cultural antiquity, a part of the castle was improved and was then opened in June of 2000.